The centuries of history have left their mark on the heritage ofAuch which reveals itself at the bend of many monuments, alleys and buildings of character ...

Auch, Gascony at the heart

The old Gallo-Roman city Augusta Auscorum experienced great invasions including that of the Vascons, who in the VI century gave their name to the ancient Roman province: Vasconie, future Gascogne. Auch became the archiepiscopal seat.

A city of character

Walk through the picturesque alleys, go down the 354 steps of the monumental staircase, or admire a timbered house, you can also visit a sumptuous little Italian theater, everywhere arises the Gascon spirit, which is matched only by the panache of D'artagnan whose bronze statue proudly dominates the Gers Likewise.

Auch keeps many testimonies of the city that it was in the Middle Ages.

In the XVIII century, the steward d'Etigny give to Auch its aspect of modern city and embellishes it. He established squares, new streets, and beautiful public buildings like theCity hall and the Hotel de l'Intendance.

The Sainte-Marie cathedral, with its dominant position attracts all eyes. Major site on the road of Santiago of Compostela, this monument with many treasures illustrates the transition between flamboyant Gothic and the classic Renaissance style.

The Museum of the Americas-Auch houses an incredible collection of pre-columbian art, and many other surprises such as a mosaic of feathers made in 1539 or a fresco dating from antiquity. The arts and Gascon tradition are very present in this astonishing museum.

On the way to Santiago de Compostela


Pilgrims who take the GR653 (Arles route, also known as the southern route), appreciate their passage through Auch, and take advantage of a rich heritage stopover.

Auch is doing his festival

The city is today the city of current circus and hosts the Circassian Research and Innovation Center, organizer of the Current Circus Festival d'Auch every year at the end of October. 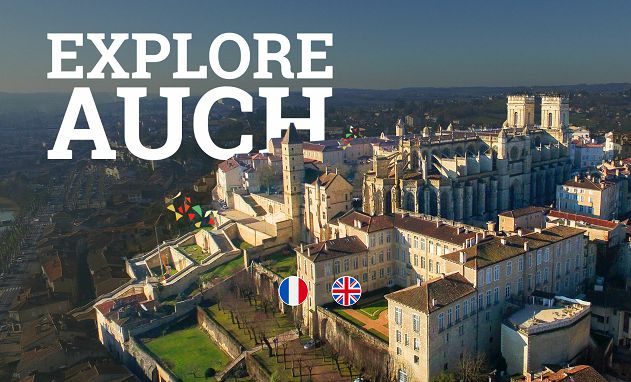 Discover the Museum of the Americas - Auch

Among its collection of pre-Columbian art, the 2nd in France, prestigious feather paintings: a museum not to be missed!